Articles in this section

Articles in this section ▾

So, if you have a number of records containing epoch/unix times, you can use a DATEADD() function in a formula field to convert that to a more friendly date by adding however many seconds (as specified by your epoch time string) to 1/1/1970.

Here's an example using the formula below: 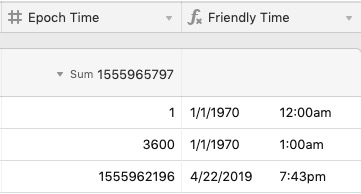 You can use a similar formula to convert the times in your base!