When building an automation, you may choose the "Run a script" action. When an automation containing one of these actions runs successfully, it will allow you to trigger a script based on record changes, a form submission, using the Airtable API, and more.

An automation's scripting action runs a script in the background of the base. This differs from the Scripting extension, which runs a script in the foreground. For scripts that you would rather run manually, the Scripting extension is the ideal tool. For scripts that you would like to run automatically, setting up a scripting automation is the best choice.

What plans is the Run a script action available on?

Does the Run a script action support interactive input/output?

Are the input and output APIs available via the Run a script action?

The input and output APIs from the scripting extension are not currently available.

The output API can currently return a maximum of 6MB of data.

What limits is the Run a script action subject to?

To illustrate how to use the Run a script action, let's walk through an example scenario. In this example, we will create a simple script that will add the value of two fields together with the result of the calculation appearing in a third field.

To get started, go to your desired Airtable base. Open the automations panel and create an automation. Then, choose a trigger, such as "When a record matches conditions".

In our example, the "Calculate?" field being checked will trigger our automation.

After testing the trigger successfully, we can move on to setting up the action. Click the blue "+ Add Action" button. Then, click on the "Run a script" option. This will bring up a window for editing your script's code. We'll start by setting up our input variables.

Input variables let you bring information from triggers and previous actions into your Run a script action. In this example, we're going to bring our "First Number" and "Second Number" fields into the script so that we can calculate their sum. 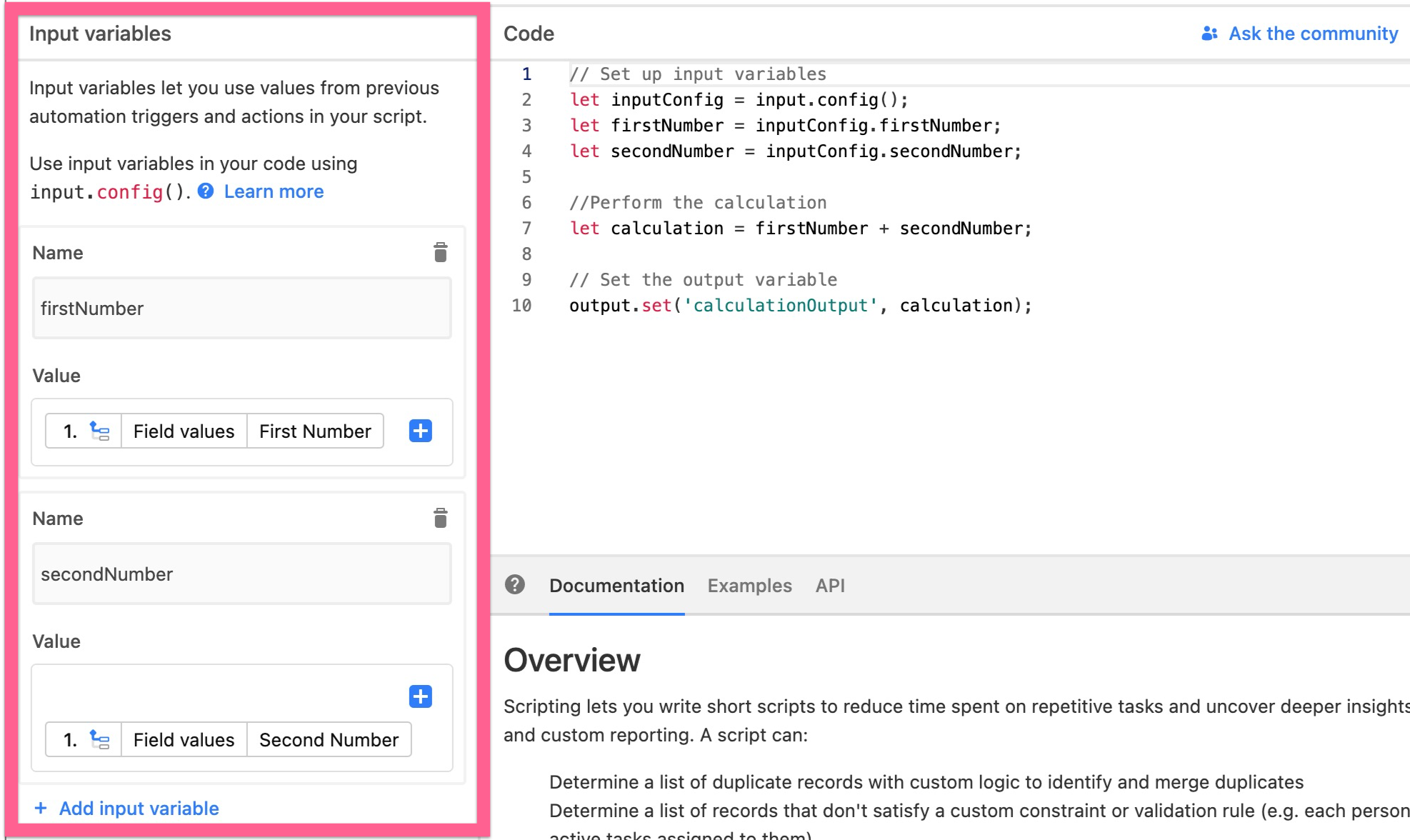 Give careful consideration to how you name your script variables. As a rule of thumb, variables should be clear, descriptive, and distinct.

After we've named our variables and added them in the Input Variables sidebar, we need to declare those variables in our script. We do this by creating an inputConfig variable with the input.config() object, after which we can declare each of our desired variables in the manner shown below:

Copy and paste the code above into your script editor before proceeding.

Setting up your script

Now we're going to add the code below to the main body of our script.

For more information on internal Airtable classes that can be accessed via your script—check out our API reference documentation.

Copy the code above into the console below the input variables we declared above.

Finally, we're going to set up an output variable. Output variables let us pass data from the Run a script action to any remaining actions in the automation run. In this example, we're going to pass our calculation variable to an Update record action. We do this by using the output.set() method to declare any variables we want to use outside of this Run a script action.

Copy the code above into the console below the rest of the script above, then click the blue test button to make sure your code does not have any errors.

As a final step, we'll add one more action to our automation: an Update record action that updates "Addition" field of the triggering record with the calculationOutput from our Run a script action.

Once you've successfully tested the Update record action, you can proceed with toggling on the automation in the upper right-hand corner of the automations console.

Starting on January 25th, 2022, Airtable made a change to URL formatting in Automation triggers and actions. Now, the base ID (appXXXXXXXXXXXXXX) will appear at the start of the URL path. This change coincides with the Understanding Airtable IDs throughout the rest of product. The change in record URL format will occur in these places:

This may be a breaking change if your automation makes hard assumptions about the format of a URL property (e.g. by deconstructing the returned URL into its component parts or similar). No action should be needed if your automation only uses the URL for navigational purposes. Browser navigation will continue to work for the old-style Airtable URLs via redirects, although these redirects may not be supported indefinitely in the future. If your automation constructs Airtable URLs from scratch, we recommend updating the construction logic to also include the base ID.

How is the Automations scripting action different from the Scripting extension ?

Scripting extension scripts run in the foreground of the base. They’re triggered directly by a user, who is then able to see any output from the script and add any additional input the script asks for. They’re ideal for automating workflows that require some human involvement.

Automations scripting action scripts run in the background of the base. They’re triggered indirectly and run automatically behind the scenes while the user keeps working. They’re ideal as an escape hatch for when our other automation actions don’t support something, or for advanced automation use-cases.

Will the script run even if my base is not open?

Yes. Once enabled, the script will run when a record enters the view, regardless of whether the base is open. This allows you to schedule when a script runs, or trigger a script based on a form submission or by using the Airtable API to create or edit a record.

What APIs can I access using the Automations scripting action?

You can access any API – post a tweet on Twitter, or use the Airtable API to make a change in another Airtable base. Unlike the scripting extension, there is no core origin resources sharing (CORS) limitation.