At times, you may experience issues with your automations. Though this article is not exhaustive, we do feel that this represents the bulk of the automation issues that Airtablets run into. Below are a few tips that will set you up for success when troubleshooting automation issues.

For instance, the "When a record is created" trigger is great to use for form submissions because all of the information in the record is submitted at the same time. However, if you are manually adding new records within Airtable, then another trigger will work better as the "When a record is created" trigger will run the automation before you have any time to enter information into the various fields in your base.

NOTE
The Automations overview support article has a listing of the various triggers with links to more information on each.

At times, a particular record may be missing information in a certain field that is imperative for your automation to test or run successfully. Knowing what the test record for your automations is can be extremely helpful in the troubleshooting process.

Identify which part of the automation process is failing

NOTE
Consult the testing rail of the automation that is failing to see if any part of the configuration needs to be updated.

Individual automations can have only one trigger, but multiple action steps. When looking at the run history for an automation, you can click the drop-down and see which trigger or action(s) are failing. Here's an example of what a failed action step would look like:

Look at the run history to find more details

If your automation is on and all steps have tested successfully but you are not seeing expected behavior, then it's necessary to look through your run history for more clues. Automation runs can fail for a variety of reasons. It's worth looking through multiple failed runs to see if there is a common trend.

You might see the following statuses in the run history section:

Are other automations in the base impacting your workflow?

If you have multiple automations turned on, then look through those automations and consider their potential implications elsewhere in your base. For instance, an automation set to update another record may meet the conditions set in another automation that results in further changes to that record and/or makes it appear that the first automation has not run.

NOTE
It may be useful to turn off all of your automations and then turn them back on one by one to see if you can identify which automation or automations may be conflicting with one another.

This example below is simplified, however, automations can be quite intricate. So, the testing rail is a great way to look at the entire automation and quickly identify which part(s) are currently experiencing an error or invalid setup. In the example below, we can see that the trigger is properly tested and performing nominally, but the "Send an email" action needs some attention.

Hovering over the warning symbol ⚠️ will provide additional context about the issue.

My automation turns on then off

This can be caused by an authentication issue, such as a password change, in automations that are connected to some other external software such as Google workspace, Facebook, Jira, Microsoft Teams, etc. To remedy, try reconnecting to the external software by choosing "Manage connected accounts" in the automation:

More info on connecting and managing external accounts can be found here.

My automation will not turn on

Typically, an automation will not turn on if a trigger or an action step has not been fully set up. To remedy this, look back through your automation and check that all steps have been tested and any fields that should contain information have been configured.

I'm seeing an error in the trigger step

An error in the trigger step is most often associated with these occurrences:

I'm seeing an error in the action step

Errors in action steps can happen for many reasons. The most common reasons are:

My automation was disabled unexpectedly

Sometimes, automations will become broken due to something outside of Airtable's control. An example of this is when an automation uses a Google Sheets trigger. After an automation has been successfully set up and tested, renaming the Google Sheet used in the trigger step will break the automation. There are many different ways this kind of asynchronous, background breakage can happen. When a situation like this occurs an error icon will appear next to the automation that is broken. Additionally, the automation's configuration window will show a message.

To resolve this behavior investigate the various parts of the automation and consider changes made outside of Airtable that may have caused the automation to break.

I received an email that an automation failed

NOTE
The individual user that toggles the Automation "On" is the user who will receive failed automation run notifications.

If an automation fails to run, you should receive an email with the subject, "Something went wrong with an automation". See the example below for what that email looks like.

To fix this, click the "View automation" button in the email and then look at the run history for information on which runs failed and to help determine why the failure occurred. Here, you'll also have the opportunity to rerun the failed runs. 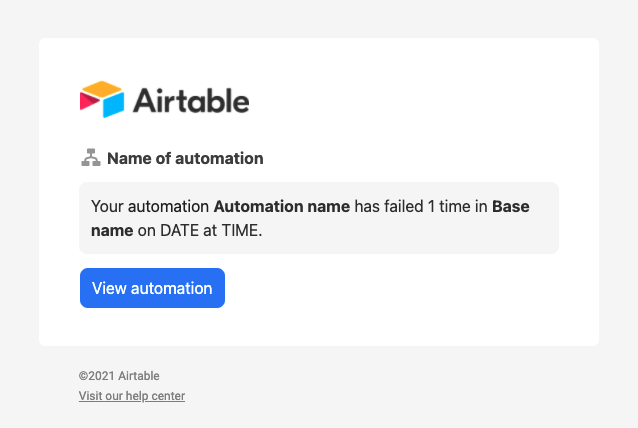 My automation is missing information

The places we most commonly see issues surrounding this issue include:

Looping automations can occur when:

My automation is adding unexpected information

The places we most commonly see issues surrounding this issue include:

My automation is removing information

It is important to remember that automations do not append information, they replace (overwrite) information. This means that if a field happens to be cleared in a certain record, then the automation output would clear the field being updated in another Airtable record. In other words, the information previously held in the updated record will be removed. It is possible to build an automation that will output information in a way that it looks to be appended, but the process will vary depending upon the workflow and Airtable base setup.

Why aren't the date, or time-based, conditions in my "Find records" action, conditional logic, or "When a record matches conditions" trigger evaluating correctly?

Automations run on GMT since that is the default timezone that Airtable operates on behind the scenes. When setting up time-based conditions in Automations you may need to adjust times manually or create a formula to auto-adjust times so that the conditions evaluate according to your timezone.

If the previous steps didn't fix the issue, then our Support team is able to provide guidance, however, full workflow buildouts are not currently something we can support. Please include an online-hosted screen recording (Loom, CloudApp, etc.) in your request to our Support team so we can speed up the troubleshooting process. We discourage sending MP4 files in your support request or uploading videos to Google Drive as these often prevent our support team from accessing the screen recording file.

For the best support, slowly walk us through the entire automation workflow including the bullet points listed below:

If you can't create a screen recording, then you can alternatively provide the following screenshots:

Why is my automation taking so long to run?

Automations are designed to run almost immediately. However, if the load on the base is high, they will be delayed because they are queued behind earlier base operations.

Why is my automation failing?

Why is my test failing?
Why does my date / time / number / duration have weird formatting?

The user who last switched it on.

Why did I get so many unexpected automation runs?

This could be for a variety of reasons. For example:

Why can't I insert this value from a previous step into my current step?